This website is the diary of a street portraitist.   The pictures you see here are on-location, without a tripod, and largely unplanned.   The people were strangers to the photographer before he asked to take their picture for Northwest People.  We’re not under the illusion that these images capture all the complexities or even the basic essence of the people shown, but we hope the portraits honestly document some part of each person’s personality at one particular moment. 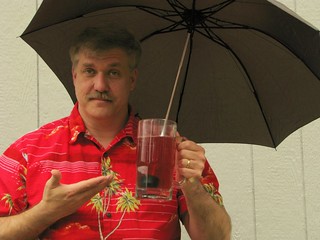 Steve Campion is a photographer (often appearing under the name “scampion”) and owner/editor of WA-List.com, a site about anything and everything Washington. In the course of his wanderings, he meets many people and photographs some of them if they approve.  We’re very pleased each of them said yes.

Steve graduated from the University of Puget Sound, worked in a state museum and a county library, gave dozens of Northwest history talks, and owns an extensive collection of Washington books.  He is rarely seen without a book, a camera or a bicycle.  Sometimes you’ll catch him with all three.  He lives in Pew-awl-up.

A WORD ABOUT COMMENTING

We welcome and encourage your comments!  Please remember that this site is intended to celebrate people, not to put them down.  We would like the comments to be fair and open but not insulting.  No cruelty!  Offensive comments directed at the people in the photos will be deleted.  Kind and thoughtful comments, though, may experience a delay as we run everything through our cruelty filter.  Please be patient.

A WORD ABOUT GEOGRAPHIC VARIETY

We travel throughout the Northwest, but there will be an obvious bias in photo locations simply because we live in and/or visit certain counties more often than others.  We don’t mean anything by that; it just is.  We have been to every county in Washington several times (and most of Oregon and Idaho, too!) but not since this project began.