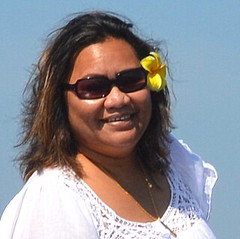 She perched on a large piece of driftwood and attempted a selfie.  She had tried to interest her family in a photograph but there were no takers.  She was determined.  It’s not easy to photograph yourself and the beached log on which you’re standing.  From a quarter-mile away I could see her struggle with the challenge.  Believe it or not, I could even make out the flower in her hair from that distance.  I planned to offer my assistance but she had already retreated to her family’s beach base on drier sand by the time I finally arrived.  Didn’t stop me from asking her for a re-do, though.  We waded back out into the shallow waves and tried again.