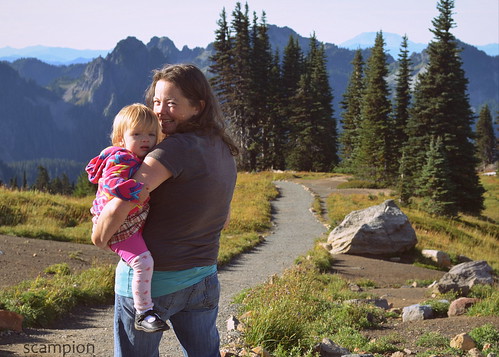 This mom and daughter were enjoying a twirl at 6200 feet as I was hiking up the Skyline Trail at Mt Rainier.  The girl was spinning and sideways and joyful and laughing.  I didn’t dare interrupt.  But I doubled back a few minutes later hoping I might capture some of that joy.  What I got was inspection.  The mom was smiling but the 15-month old girl was wondering about the guy with the camera.  I played peek-a-boo with her.  Mom turned a few times.  Nothing.  She was all business.  I missed my chance to photograph her exuberant side but was pleased with these two pictures nonetheless.

Mom and toddler were on a hike with dad and 9-year old sister.  The older sister was “calling the shots,” mom said.  The girl was walking and her parents were letting her decide how far to go.*  I was impressed.  They had already hiked farther up from the Paradise parking lot than many adults.   We were in an alpine meadow.  And they were even farther up the trail when I encountered them again later when we were both making our descents.

Notes:  (a) That’s Mt St Helens in the far distance of the smaller photo.  (b) The day we met on Rainier was the woman’s birthday. Her husband let me in on that secret while she and the older girl were off stomping in some trail-side snow — snow in September in one of the most beautiful places on earth.  Happy birthday.

*This reminded me of several early hikes I had with my own daughters.