Meeting a friend for coffee is almost always a pleasant activity.  It was especially nice for me this day because I hadn’t seen my friend (who is not pictured here) in several years and the coffee shop she chose was in a comfortable old downtown building.  I ordered tea and a cookie as we talked until she left for a business function.  That’s when I struck up a conversation with the shop owner (above). 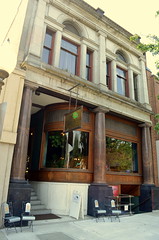 She kindly told me some of the building’s history.  I correctly guessed it had been a bank in a previous era, but she filled in the gaps of my imagination, confirming the location of the tellers’ windows and telling me where the banker’s office and vault had been.  She also told me the place had been designed by Kirtland Cutter, an early 20th century architect whose name I have been running into in towns all over the Northwest for 25 years.  The 2-story bank building went up in 1905.  A sign on the counter mentioned its career in jewelry and book retail as well.  The handsomely patterned ceiling and beautiful front windows have witnessed many conversations like ours over the years.

What about my new acquaintance’s business career?  She told me that she had operated a coffee stand a dozen or so miles out-of-town, but rolled the dice and moved into this building when she found it vacant two years ago.  The Blue Lantern, she calls it.  Lewiston is going through a downtown revival and her shop is near the center of it.   She’s hopeful that her business will continue to grow with the city.  It certainly has charm.