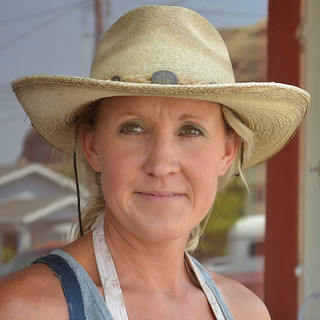 She said she has worked with horses most of her life. She’s currently employed at a ranch not far from town. I met her at a bakery in Asotin where she and a friend were inside waiting for lunch. After introducing myself and telling her about my project, we went outside for a brief photo shoot on the sidewalk. I took only four photos, hoping that there was at least one gem among them. Her friend was already seated with lunch by the time we walked back into the bakery.

Side note: A friend of mine had told me that the bakery was terrific. “You have to try the maple bars.” I seldom eat donuts, but I put the bakery on my list of stops. The maple bars were sold out when I got there. I settled for an apple fritter, but my unexpected encounter and portrait of the rancher made the visit worthwhile. I thanked her on my way out.