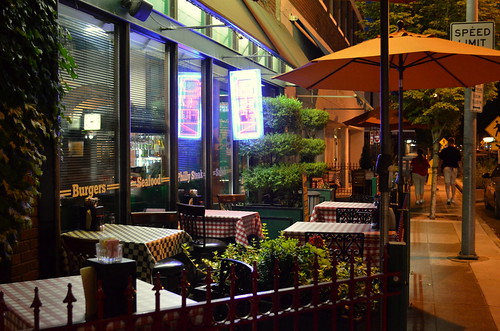 It was early morning and this young man was getting the cafe down the street from my hotel ready for the workday. I encountered him on my pre-breakfast stroll down Main Street.  He was arranging the sidewalk seating, placing chairs, washing tables, and listening to music. He was animated, working swiftly with broad physical movements. I asked him if I could take his picture, thinking in my mind’s eye that I would capture him in a close-up doing something slow, small, and focused like placing silverware or water glasses on a table. He agreed to the picture but immediately started opening the umbrellas. I had to widen the frame quickly and change my angle to capture the larger scene. It was worth it, though. The resulting photo was much more in step with his natural movement.

When I looked at the photo again later, it struck me as familiar. The night before I had gone for a walk to relax (it was still 95° at 9pm) and passed the very same sidewalk cafe. I remembered taking an earlier photo (right), of course, but the scene had given me such a different emotion that I had no idea it was from nearly the same location.